The Town of Timnath is a Statutory Town located in Larimer County, Colorado, United States. Founded in 1882, Timnath is a small agricultural/farming community located southeast of Fort Collins, Colorado, approximately one-half mile east of the Harmony Road/Interstate 25 interchange, on a small bluff east of the Cache la Poudre River. The surrounding farmlands have been used primarily for potatoes, alfalfa, sugar beets, and cattle. Although the town has remained virtually unchanged in recent decades, the encroaching growth of both Fort Collins to the west and Windsor to the south have placed the town in an area considered favorable to development. The population was 625 at the 2010 census. Timnath has been one of the fastest-growing communities in Colorado since 2010, and in 2016 had an estimated population nearing 3,000. 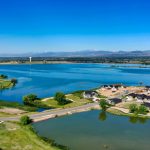