Named for the second Territorial Governor of Colorado, John Evans, the town was established in 1867 and was Weld County’s seat of government twice before Greeley finally captured the honor. Legend in Evans is that the county records were stolen by night-riders from Greeley, who also burned the courthouse down with the county seat documents. The town was incorporated in 1885.

Today, Evans, like other towns in Colorado along the South Platte River, is home to a rapidly growing Hispanic population. Evans has several primary commercial areas located along US 85 just south of its junction with US 34, as well along 23rd Avenue and on 37th Street with new commercial areas developing as the city expands to the west and south of the South Platte River. 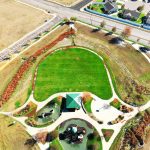