Loveland is the Home Rule Municipality that is the second most populous municipality in Larimer County, Colorado, United States. Loveland is situated 46 miles (74 km) north of the Colorado State Capitol in Denver. Loveland is the 14th most populous city in Colorado. The United States Census Bureau estimated that in 2014 the population of the city was 72,651. The city forms part of the Fort Collins-Loveland Metropolitan Statistical Area and the Front Range Urban Corridor. The city’s public schools are part of the Thompson R2-J School District. 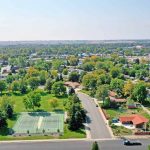